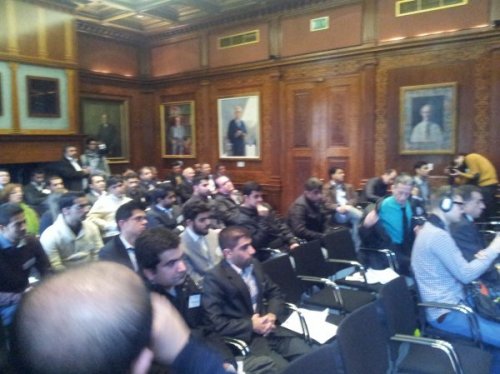 The recent UNPO Conference on Balochistan in London led to the Pakistani High Commissioner in the UK to state that foreigners should respect the integrity of Pakistan, instead of interfering in the country’s internal affairs.

Below is an article published by the Friday Times:

To highlight the plight of the Baloch and Hazara Shias in Balochistan, a day conference entitled “Global and Regional Security Challenges in South Asia: What Future for Balochistan” was organized by Unrepresented Nations and Peoples Organization (UNPO) at The Royal Society, London. The conference was attended by US Congressman Dana Rohrabacher, Congressman Brain Higgins, Baloch nationalists, Khan of Qalat Mir Suleman Daud, Nawab Mehran Mari, Baloch representative in the UN, Noor-ud-din Mengal, and columnist Tarek Fatah.

The first panel of the conference was chaired by Baloch activist Noor-ud-din Mengal, who discussed Balochistan’s role in the world power game. Athar Hussain, director of the Asia Research Centre at London School of Economics, addressed “Pakistan’s inability as a state to protect its citizen and the brutality with which it has addressed tensions with Balochistan”. Burzine Waghmar from the Centre for the Study of Pakistan at SOAS, journalist Anna Reitman, and several Baloch speakers spoke about the “Talibanization of Balochistan, the rise of Islamic radicalism in South Asia, security in Iranian Balochistan, the key role energy and mining resources play in Balochistan, and the influence of Iran, Pakistan, India and China in the region”.

The third panel discussed Balochistan’s future. It included US Congressman Dana Rohrabacher and Khan of Qalat Mir Suleman Daud, who called for a “united Baloch front in the struggle against the horrors imposed on the Baloch people by Islamabad”.

Addressing the conference, Dana Rohrabacher, known for his support for independent Balochistan, called for a referendum in the province, that he said would challenge Islamabad’s claims the Baloch wanted to be part of Pakistan. “Pakistan is not a friend of the United States and of those who believe in peace, prosperity and freedom for the people of the world,” he said.

“This is unacceptable and nonsense,” Pakistani High Commissioner in the UK Wajid Shamsul Hassan said in response. “Whether it is the US, Canada or nationals from any other country who demand the right of self-determination for Balochistan, I would only urge them not to interfere in Pakistan’s internal affairs.” He said the world should respect Pakistan’s sovereignty and not support efforts to destabilize the country.

Pakistani authorities have long been criticized for enforced disappearances and what is called the “kill and dump policy” against Baloch nationalists.

“Today, it was a comparatively low profile conference in London demanding independence for Balochistan. If the situation goes unnoticed, things may get out of control,” said analyst Jan Achakzai.

Pakistani High Commissioner in the UK Wajid Shamsul Hassan admitted that the situation in Balochistan was deteriorating, but said it was because of “foreign involvement”.

“Some internal forces, with the backing of their foreign allies, wish to destabilize the state and I have no doubt that these are the forces that are involved in the gross human rights violations, including the killings of hundreds of innocent people,” he said.

But Baloch nationalist leaders disagree. “Participants of the UNPO conference on Balochistan have urged the Pakistani authorities to give the people of Balochistan the right of self-determination,” said the exiled son of Nawab Khair Bakhsh Mari, Nawab Mehran Mari, who represents Baloch nationalists at the United Nations and other international forums. “We want an independent and sovereign Balochistan. No more, no less.”

The participants of the UNPO conference condemned the Quetta bombings in which more than 200 Hazara Shias were killed. Mehran Mari blamed the security establishment for the attacks, and said it backed Lashkar-e-Jhangvi.

Wajid Shamsul Hassan looks at the problem in a different context. “The main issue is the Gawadar Port, which has been handed over to China against the will of certain countries. The internal enemies of Pakistan have full support and backing of those foreign forces (who want the control of Gwadar Port),” he said.

A majority of human rights violations in Balochistan, including the killing of Shias, was being carried out by these forces “who are not happy to see China in Gwadar”, he said.

After the Pakistan People’s Party government came to power, President Asif Ali Zardari had apologized to the people of Balochistan for their sufferings. In an effort to heal their wounds, the PPP government increased Balochistan’s share in the National Finance Award as well as in the employment quota. But Baloch nationalists are not convinced things will change.

“They say the general elections are round the corner and they expect us to take part, but I want to make it very clear that as per our elders’ decision, we do not intend to participate in any elections held by Pakistan,” said Mehran Mari. “Taking part in elections would be an endorsement of killings and enforced disappearances of thousands of Baloch people,” he said.