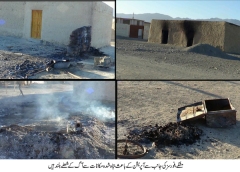 Occupied Balochistan: Pakistani security forces have set several houses on fire and beaten up Baloch women and children during a military operation in Kandri region of Balochistan on Friday.

According to sources the Pakistan military raided several houses including that of Raheem Bakhsh Baloch in Kandri region of Mashky, Balochistan. After a thorough search the forces set the houses on fire. People’s belongings and some houses were completely burnt to ashes. Several women and children have been wounded because of the military personnel’s torture against them.

People in the region are reportedly facing enormous difficulties because of the presence of heavy number of forces and check posts in the area. “The region is still under siege as all the exits and entrances have been sealed,” local sources reported.

It is pertinent to mention that Pakistan FC and military have initiated a military operation in Mashky area of district Awan in Balochistan on 25 December 2012, which continues to this day. Numbers of check posts have been doubled and Baloch women are stopped and searched at these check posts on regular basis which is inhuman and against the Baloch code of honour.