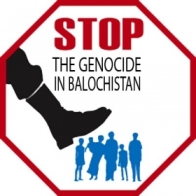 Occupied Balochistan: Body of previously missing Baloch students was found in Gedar area near Kalat town on Balochistan on Saturday.

According Balochistan media reports passerbys spotted a body in Gedar area of Kalat and informed authorise. The local administration took the body in control and shifted to hospital where it was identified as that of Hasan Langov Baloch.

Mr Langov was reportedly abducted in February 2009 from Mongchar area of Balochistan along Mehrullah Baloch who is still missing. Two other Baloch activists, Abdul Rauf and Yahya Baloch were shot dead during the same period.

Baloch political parties have term the killing of Hasan Langov the continuation of ongiong abductions and discovery of mutilated bodies of abducted Baloch activists.

According to Voice for Baloch Missing Persons, an organisation striving for the recovery of abducted Baloch activists, over 14000 Baloch have been abducted by Pakistan authorities. Among them over 600 have been killed in custody and their mutilated bodies were found in desolated areas across Balochistan.