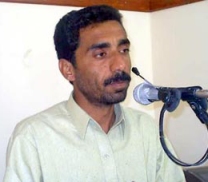 He alleged, “Pakistani occupying military have been conducting a brutal army operation in Mashkay of Awaran district using heavy weaponry against unarmed population.”

He said the use of indiscriminate air power against unarmed innocent Baloch people showed that the colonial state was utterly frustrated over the increasing Baloch popular movement for freedom.

He urged Baloch nation to bring unity in their ranks and be mentally ready to face the enemy’s repression and atrocities against their children and other vulnerable sections of Baloch society.

He strongly criticised world powers including America and Iran for supporting Pakistani state, adding that “their aid to Pakistan is being used against Baloch nation.”

He further said previously the aid that Pakistan received in the name of war on terrorism has been used against Baloch national resistance in an effort to eradicate the Baloch National identity and loot Balochistan’s natural resources without facing any resistance.

He alleged that, “Pakistan has perpetrated worst type of human rights abuses during Awaran Mashkay siege in which children and women were killed and injured.”