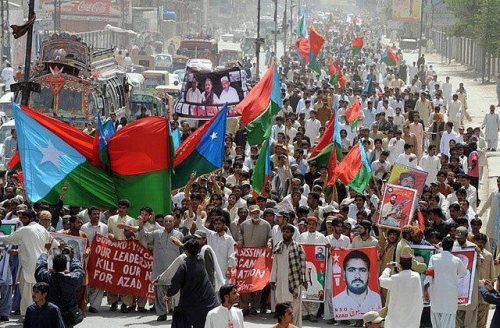 Early in 2012, a small group of US congressmen looking for alternatives to the Obama administration’s AfPak policy made recommendations for two changes in the region. The first, that instead of fantasizing about incorporating the Taliban into the Afghan political system the United States ought to rearm the Northern Alliance, had been discussed previously. The second recommendation was more novel and controversial: instead of trying to normalize relations with Pakistan’s corrupt government and hostile military, the US ought to support the creation of a separate state of Balochistan in the southern part of Pakistan. US Representatives Dana Rohrabacher, Louie Gohmert, and Steve King went so far as to introduce a bill stating that the “Baloch nation” had a historic right to self-determination and called for Congress to recognize Baloch independence.

Although the congressmen involved are not seen as influential members of the foreign affairs establishment, the idea of dismembering the largest of Pakistan’s four provinces, consisting of nearly half of the country’s land mass and having a profound strategic importance because of a shared border with Afghanistan on the north, threw Balochistan into the US foreign-policy calculus almost overnight. Journalists and think tanks began to examine the Baloch nationalist movement and its heterodox idea that because ethnic identity trumps religious identity Muslim Pakistan is therefore not a nation. The controversy that has divided leaders of the Baloch nationalist movement—greater autonomy versus outright succession from Pakistan—began to receive new scrutiny. As with other sudden policy enthusiasms, however, the subject quickly got ahead of itself, racing past the deeper understanding of Balochistan’s history and its place in Pakistani nationhood that is required to bring the independence movement into clear focus and understand the implications of its demands.

Among the ancient inhabitants of the central Caspian region, the Balochs were an independent tribal union until the nineteenth century. In 1893, the British drew the Durand Line, which divided British India and Afghanistan, as well as the Pashtun and the Baloch tribes on both sides of the new border. Indian independence in 1947 gave the tribes the choice of joining either Pakistan or India. Baloch leaders agitated for a third way: independence. Lord Mountbatten, the last viceroy of India, believed that Balochistan would not be able to survive on its own and forced it to join Pakistan. One of the Baloch leaders at that time, Suleiman Khan, later said: “We had no desire to be part of Pakistan but we were ignored and the agreement was eventually forced down our throats. Till the very last moment, they kept us in the dark. All the time we were assured that the Baluch would keep their independent state but instead we were sold down the river.”

To those familiar with Pakistan’s history and politics, it’s little surprise that Osama bin Laden turned up there. As more than half a century of problems show, the country faces a deep identity crisis it must soon address if it hopes to survive.

The alignment with Pakistan was initially based on an agreement that Balochistan would be autonomous and retain authority over land, resources, and political matters while the Pakistani government would oversee currency, foreign relations, and defense. But almost from the beginning, the central government aimed at control, leading to violence between Baloch guerrillas and the Pakistani army sent into the province to subdue them.

One of the more dramatic confrontations came in 1963 when Baloch leader Sher Mohammad Marri resisted the central government’s intention to establish military bases in the province, giving rise to an insurgency ranging over forty-five thousand miles. The insurgency ended after five years with a cease-fire agreement that promised greater political autonomy for Balochistan. But these promises were not kept and Baloch separatists mounted another insurgency in 1973, fighting for greater social and political rights and an end to exploitation of Balochistan’s resources. Pakistan’s military operations in the area, supported by forces of the Shah of Iran, exacted a high toll on Baloch insurgents. In 1973, an assault by the Pakistani Air Force ordered by General Tikka Khan, later referred to as the “Butcher of Balochistan,” led to the deaths of five thousand guerrillas and more than three thousand soldiers.

A truce finally came after Pakistani President Zulfikar Ali Bhutto fell to a coup by General Zia-ul-Haq. General Zia initiated a policy of development that temporarily quelled that insurgency of Balochistan’s people. But after three decades of unfulfilled promises for more effective local government and a greater share of state resources, another one broke out in 2005 and has yet to be contained.

It is obvious why the central Pakistani government has been obsessed with keeping tight control of Balochistan. It is not only the largest province in Pakistan in terms of area, with a population of roughly seven and a half million, but it has vast natural resources, especially energy resources, including an estimated nineteen trillion cubic feet of natural gas and six trillion barrels of oil reserves.

The central government controls tourism, environment, population, labor, welfare, the newspapers, and even the educational curriculum, which rigorously excludes the use of the Balochi language, which Pakistan’s political elites ridicule as primitive.

Not surprisingly, Balochistan’s literacy is the lowest among the four provinces. Despite being the major supplier of natural resources to other Pakistani provinces, the Balochs are behind the rest of the country not only in terms of education, but also in social development. They have the lowest per capita income among the four provinces, with sixty-three percent living below the poverty line, eighty-five percent lacking safe drinking water, and eighty percent without electricity. There are very few government civil servants from Balochistan working in Islamabad, moreover, and not even one Baloch in the Pakistani Foreign Service.

This deprivation has fueled the ongoing spirit of insurgency, whose causes scholar Frederic Grare summarizes as three-fold: expropriation, marginalization, and dispossession. Expropriation relates to the Balochs’ claim that their resources are exploited by the Punjabi-dominated central government. Marginalization particularly relates to discrimination against Baloch labor in ongoing development projects, with workers often imported from the other provinces rather than hired locally. Dispossession is an issue because Balochs see the best of their land being taken over by “foreigners” from Islamabad.

The province is now in the middle of its fourth major episode of insurgency, following major outbreaks in 1948, 1963–69, and 1973–78. The central government has always claimed that these eruptions were the result of conspiracies to dismember Pakistan between Baloch leaders, the Soviet Union, and Iraq. It has used military force to deal with the guerrillas who have damaged gas pipelines, blocked coal shipment to Punjab, and made life tough for the Pakistani army in the mountains despite numbering at best some fifty thousand against the army’s force of more than eighty thousand.

The current wave of insurgency began with the gang rape of a female doctor by army officers. The late veteran politician Nawab Akbar Khan Bugti voiced his anger and demanded punishment of the rapists. In response, the army launched an attack on Dera Bugti, the country’s largest natural gas reservoir. Baloch guerrillas countered by firing rocket launchers at then President General Pervez Musharraf’s helicopter during a visit to Quetta, Balochistan’s largest city. A full operation by the Pakistani army then began in the province, particularly in Kohlu and Dera Bugti, in 2005. Several Bugti and Marri militants were killed, further fueling an insurgency that had already been complicated by the simultaneous rise of the Taliban, the War on Terror, and the decline of law and order in Punjab and Karachi. Taking advantage of the rapidly changing (and deteriorating) situation, the Baloch movement gained momentum, popularity, and support, locally and internationally, setting up a government in exile in 2006.

As the Balochs have gotten more serious about independence, the central government has responded with an heavier display of force. Nearly four hundred bullet-ridden bodies of Balochs have been recovered from mountains and roadsides in recent years—most likely, casualties of ISI, the powerful Pakistani intelligence service, which has been active in the province. Others suspected of ties to the insurgency have been “disappeared,” according to the Baloch Missing Persons Forum, which claims that some ten thousand individuals are assumed to have been confined and tortured by the Pakistani secret service agencies before being killed.

Over the past few months, a faction of American congressmen, minority Afghan groups, Baloch nationalists, and supporters have outlined a framework for an alternative US policy to Southwest Asia. US advocates for an independent Balochistan have yet to receive wide support, but their campaign, which now centers around secession, is receiving more attention among policymakers particularly because of three recent high-profile events: the congressional hearing on Baluchistan; the introduction of a Baloch self-determination bill in Congress; and a highly publicized meeting of the Balochistan National Front in Berlin earlier this year.

Supporters of the new approach note redrawing of Southwest Asia’s political borders through Balochistan independence would advance American interests on several fronts, especially by creating valuable new economic opportunities that could offset the costs of the failed wars in Afghanistan and Iraq and spur economic growth after the global recession.

Meanwhile, the insurgents, particularly those in the government in exile, are reinventing themselves to attract more attention from the US. In its earlier phases, the insurgency was dominated by a Marxist ideology and to some extent (enough to be an irritant to Islamabad, but not enough to involve an expensive commitment) supported by Russia. Many of the leading figures studied in Russia and styled themselves Marxist-Leninists. However, the latest outbreak of hostilities occurred after the death of the Soviet Union and has looked toward India, Great Britain, and especially America for support. That it now sees itself as a democratic movement is reflected in the recently drafted Charter for the Liberation of Balochistan: Article 1 stipulates “one person one vote.”

There is also a new sophistication about international opinion on the part of the insurgency’s leaders, especially Allah Nazar Baloch, the forty-four-year-old leader of the Balochistan Liberation Front. The eponymously named rebel trained as a medical doctor and is part of a new generation that has taken the cause of independence global, successfully espousing the cause in the British House of Lords and the American Congress.

The liberation movement has also been buoyed by the tides of war in the region. Pakistan’s hidden agenda has always involved secretly supporting the Taliban for its own strategic purposes. But the Karzai government in Afghanistan has found a chance to pay it back by providing safe haven to the Baloch guerrillas who shelter and train in camps there.

Pakistan today is facing unprecedented challenges: economic turbulence and rising poverty, a stalemated army operation in the Northern region, law-and-order issues in Sind and Punjab, an increasingly cold collaboration with the US in the War on Terror, spillover effects of Afghanistan’s insurgency, and, of course, the enduring rivalry with India. It cannot afford Balochistan’s insurgencies, which—owing to the province’s vast land, hostile terrain, arid climate, and a population unreconciled to Islamabad’s discriminatory and exploitve policies—have been difficult to suppress. Pakistan has attempted to drown the voices of the Balochs for more than sixty years, but they appear to be growing louder and more demanding with each passing day.

Aurangzaib Alamgir is a Ph.D. student at the Asia-Europe Institute at the University of Malaya in Kuala Lumpur, Malaysia.