Karachi: The Voice for Baloch Missing Persons (VBMP) took out a massive protest rally in Karachi on Wednesday 19 December 2012 on completion of their 1000 Days form peaceful protest against human rights violations in Balochistan.

Thousands of people joined the rally to pay tributes to enforced-disappeared Baloch and those who have been killed in custody by Pakistani forces. The rally set off from Arts Council Karachi and marched to the Press Club where a big demonstration was held. The participants of the rally had come from different areas of Karachi to express their support and solidarity with families of enforced-disappeared Baloch activists.

Large numbers of Baloch women and children carrying placards, banners and pictures of abducted Baloch activists chanted slogans in support of Baloch freedom struggle. The rally went to the protest camp of Voice for Baloch Missing Persons, outside Karachi Press Club, and lit candles in memory of those killed and abducted by the state security forces.

Speaking at the occasion the vice chairman of Voice for Baloch Missing Persons, Qadeer Baloch, said that, “we have taken out this rally on the completion of our 1000 days of protest for the release of our loved ones. Today is an important day for Baloch struggle because despite abduction of 14500 of our beloved ones and killing of 606 activists in custody, our movement is continuing with patience and consistency. The intelligence agencies of Pakistan have threaten to kill us [leaders and workers of voice for Baloch Missing Persons) but I will not mention those difficulties and hardships, because those who are sacrificing their lives, and those who are languishing in enemy’s secret prisons are facing inhuman torture and state barbarism which are far greater hardships than what we are facing.”

He said in these 1000 Days the Baloch students, pro-independence political parties, women, children and social activists with the regular visits to the camp have encouraged the VBMP to continue the struggle for recovery of abducted Baloch.

He further said, “the study of different liberation movements around the world shows that those nations who fought on different fronts against their enemy have succeeded to reach their destination.”

He said Voice for Missing Persons was established with the aim to highlight the state atrocities in Balochistan and genocide of Baloch people. “Our main objective is to highlight the abduction and in-custody killings of Baloch political activists, students, labourer, lawyers, doctors, intellectuals, journalists and other members of Baloch society by state agencies and military. We are trying to inform media and international community, the UN and other human rights groups about the plight of Baloch nation. We are struggling peacefully and democratically to achieve our objectives. We initiated this movement on platform of VBMP from Quetta with the setting up of a token hunger strike camp.”
He said to promote the cause of Voice for Baloch Missing Persons, “we have set up the International Voice for Baloch Missing Persons (IVBMP) with cooperation of our comrades abroad. Through IVBMP we are informing the world including UN human rights council, EU, America, Canada and the Middle Eastern countries about plight of Baloch missing persons. As result of our struggle the UN has sent a delegation of WGEID to Pakistan and Balochistan to investigate the cases of enforced-disappearances.”

Mr Qadeer Baloch said the UN group met members of VBMP and other Baloch pro-independence political parties in Karachi and Quetta. The GWEID expressed grave concern over enforced-disappearance and extra judicial killing in Balochistan and urged Pakistan to stop military operations and release the illegal detained persons immediately. He said the US senate has also expressed concerns about human rights violations in Balochistan and recommended that Baloch should have the right to decide their fate. The US senators have also recommended the suspension of support to Pakistan military, he added.

He said during these 1000 days Voice for Baloch Missing Persons have set up camps in Quetta, Karachi and Islamabad. Large numbers of families of abducted Baloch have participated and joined the VBMP campaign for release of their loved ones. “we have continuously been on protest for past 1000 days. Today the VBMP is message to Baloch nation is that, “the main objective of our struggle is freedom of Balochistan and we do not hesitate to render any sacrifice for the national cause. We will continue our struggle against the extra-judicial killings and for the release of abducted Baloch activists even if you have to protest for a thousand year. We want to assure the Baloch nation that we will not back-down from our commitment and struggle at any cost.” 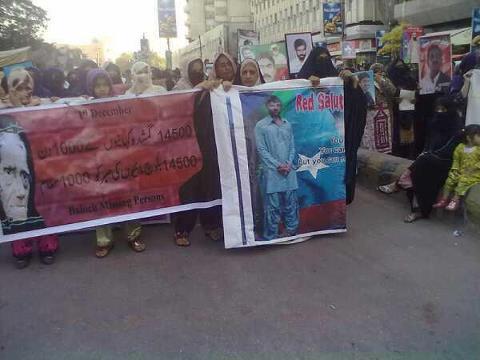 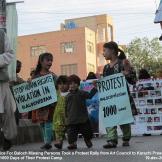 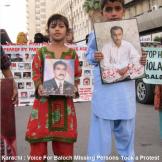 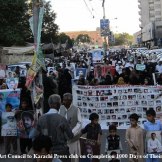 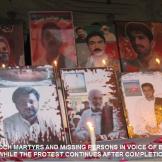 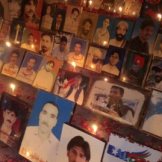