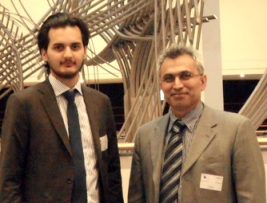 Brussels: Noordin Mengal and Nasser Boladai (Balochistan Peoples Party), representatives of the Baloch people in Pakistan and Iran respectively, made a three-day visit to the European Parliament in Brussels to raise awareness of the continued human rights abuses against Baloch people in both countries, and to urge the European Union to speak out against the continued systematic suppression exerted upon them by the Pakistani and Iranian regimes.