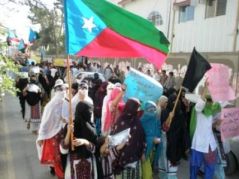 Occupied Balochistan:Baloch Republican Party has formed its women wing Shal unit and a large number of women have announced to join the party. The organizing committee of the women wing was also assembled as Miss Hooran Baloch was appointed its chief, Miss Washi Baloch as deputy organizer and Gulnaz Baloch will be its information secretary and the organizing committee is consisted of total eleven members.

In these troublous situations when the occupying state of Pakistan is pursuing the worst genocidal policies against the occupied and oppressed Baloch people and the Baloch youth are picked, detained, tortured, martyred and dumped on daily basis, the participation of the Baloch women to the national struggle for liberation is a pleasant deed and a major development in the movement.

We believe it is urgency of the time that every Baloch man or woman, old or young must join the struggle and the history is evident that whenever the oppressed nation struggled for their national liberation, women played a vital and unforgettable role in their struggles that further invigorated the movements.

We have enormous expectations to the Baloch women that they will bravely play their role to spread awareness among Baloch masses about the national struggle for freedom of the Baloch nation and independence of the motherland Balochistan. Baloch Republican Party vows to continue the struggle for the mission for which Shah-e-Shaheedan Nawab Akbar Khan Bugti, Shaheed Nawabzada Mir Balaach Khan Marri, Sher Mohammad Baloch, Ghulam Mohammad Baloch, Lala Munir, Jaleel Reki, Sana Sangat Baloch, Mureed Bugti and thousands of other Baloch leaders and youth sacrificed their precious lives. We would not let the blood of Baloch martyrs go in vain and BRP will continue its struggle under the leadership of Nawab Brahumdagh Khan Bugti for a sovereign, independent and a prosperous Baloch state Balochistan.