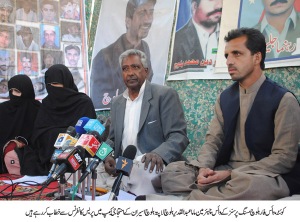 He said this in a hunger strike camp outside the Quetta Press Club. “We had set up this camp about two year ago, which is the sole platform for the relatives of missing persons to raise their voice. Families from far-flung areas come to register their protest,” he said.

“A man had visited the camp with another non-local person some three months ago and introduced him as Abdul Samad Badini, the grandson of Senator Wali Muhammad Badini. I asked him when he joined the secret agencies, to which he replied that the secret agencies asked me to go and end this hunger strike camp,” he added.

According to Baloch, Samad Badini told him that if he wanted his son alive, then he should end the strike. Baloch said that he had argued that if the missing persons were released, the strike would end, to which Badini replied that that he would come again the next day.

Continuing the narrative, Baloch said that the man returned the next day and demanded twenty lakhs in return for his son, to which he refused, saying that he was here for the 14,000 missing Balochis, not just his son. Badini then said that he would receive the dead body of his son.

“We have been on a token hunger strike for the past 610 days and are demanding immediate release of our missing relatives. Our voice has been heard by international humanitarian organisations like Amnesty International, Human Rights Watch and others and now some elements are threatening us to end the strike,” Baloch said.