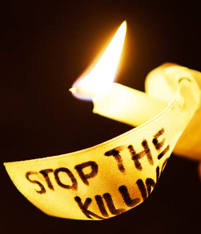 It said in a press release given out here that Balochistan Chief Minister Aslam Raesani himself had recently admitted this in a recent interview given to the BBC.

It said the abduction of Baloch students, journalists, lawyers, teachers, Doctors, political activists and even shepherds was being carried out on a daily basis by Pakistani security agencies, and added that the situation in Balochistan for Balochis is alarming.

The Baloch Human Rights Council requested the international community and the “democratic civilised world” to take notice of the Pakistani state’s heinous crimes against humanity in Balochistan, on Baloch nation, and press Pakistan to stop its inhuman brutalities against the Baloch political, social and human rights activists and civilians.

The council said that it has written a letter to British Prime Minister David Cameron requesting for his immediate intervention in Balochistan and to press Pakistan to stop all its atrocities against Baloch civilians.