The Islamic Military of Pakistan continues its atrocities in Balochistan even on the holy day of EID. 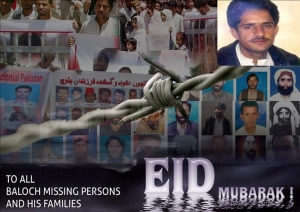 Occupied Balochistan: Four bodies riddled with bullets and terrible signs torture have been found in different locations in Balochistan. Two of them have been identified as Basheer Ahmad Baloch and Sami Baloh.

Bashir Ahmad Baloch and Zahoor Baloch had been abducted from Mastung Bazaar on 23 August 2010, later on, Zahoor Baloch’s bullet riddled body was found on 21 October 2010 from Mastung. Both the victims were activists of Baloch Student Organisation Azaad and residents of Mastung town in Balochistan. Bashir Ahmad’s body was recovered last night (Nov 17, 2010 Eid-ul- Adha 1st day). The victims had been abducted by Pakistan intelligence agencies with the help of local police.

The second victim Sami Baloch aged 20 years had been abducted a month ago on 1st October 2010 from Khuzdar Balochistan. His body has been recovered from Feroz Abad Khuzdar. He was student of Balochistan University of Engineering & Technology, Khuzdar (BUET) and was activist of BSO (Azad).

Two more bodies have reportedly been found in Mastung and Turbat who have not been identified yet.

Pakistan started murderous kill and dump polices of Baloch political and student activists in Balochistan since Jun 2010. Baloch sources and relatives of the victims of state’s atrocious violence reported that at least 48 decomposed and built-riddled bodies of Baloch abducted persons have been found in Balochistan.

Recently Amnesty International urged Pakistan to investigate the murder of 40 Baloch political leaders and students but that reported has been ignored by the Pakistani authorities.

3 responses to “Eid gift for Balochistan”