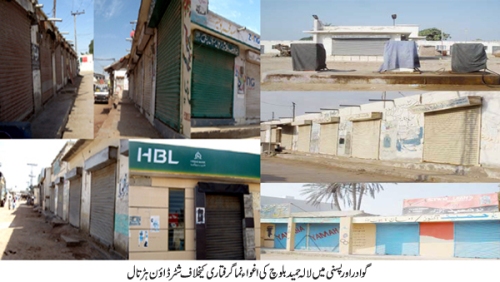 END_OF_DOCUMENT_TOKEN_TO_BE_REPLACED

The Asian Human Rights Commission has received information that in recent days illegal arrests, abduction, killings and disappearances by the law enforcement agencies have increased in Balochistan province after the announcement by the Federal Interior minister that a lesson must be taught to Balochi insurgents by any means necessary. The Frontier Corps, a para military organisation, and the military conducted an operation in the sub district of Mashkay and used helicopter gunships on the civilian areas to destroy the hideouts of insurgents and arrest their leaders.

RELATED:
A young man goes missing in custody after policemen raped him

END_OF_DOCUMENT_TOKEN_TO_BE_REPLACED

Pakistan continues the abduction of Baloch students and political activists

Occupied Balochistan: Report of the abduction of several Baloch youth from different areas of Balochistan and the persistent sit-in protests of the relatives of Baloch illegally detained persons.

Two students kidnapped in Khuzdar: Two University students were whisked away by a group of heavily armed men late on Tuesday night near Rabia Khuzdari Road in Khuzdar City. Father of the kidnapped persons, Qazi, Hassan Ali, accused Frontier Corps personnel of taking his sons hostage. According to Hassani Ali, a group of armed men barged into their house at 2:00 am and tied him and sons with ropes and blindfolded them all. “The armed men severely tortured us and they were FC personnel because we recognized them during their conversation and their way of talking using a strange language,” he added. He said the armed men whisked away his sons Munir Ahmed Sasoli and Saud Sasoli at gun point. “I chased the armed personnel and saw with my naked eyes as kidnappers entering in FC camp at Khatan, a locality of Khuzdar City” he alleged.
END_OF_DOCUMENT_TOKEN_TO_BE_REPLACED