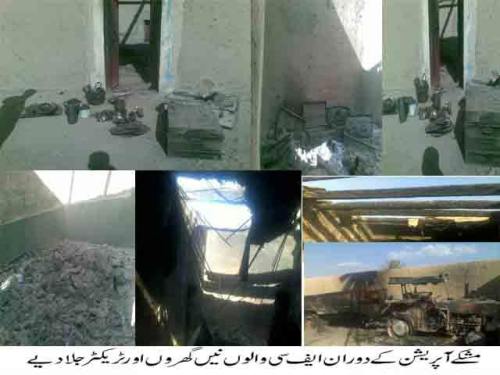 Sources reported that several people have been arrested and taken to undisclosed locations. Some of the forcefully disappeared people have been named as Bashir Ahmed Baloch, a tailor by profession and his two sons of age 9 and 13 who have been arrested and disappeared from, Wahejo, a small town in Mashkay. Bashir Ahmad Baloch’s shop has been set on fire and his family member have been severely beaten and harassed at the time of his arrest. Eye-witnesses of his abductions heard the security forces saying that he was the only tailor in the area; he must be the one who sewed the flags of Balochistan.

Meanwhile in Mehi, Dr Allah Nazar Baloch’s birthplace, a school teacher named as Raza Muhammed Baloch, his relative Adam Baloch, Aziz Baloch, Rasool Bux Baloch and Ibrahim Baloch have also been apprehended and shifted toward an unknown location. Dr Allah Nazar’s family members and neighbours have reportedly been harassed and humiliated during a raid on their house. Pakistan’s immoral military also looted valuables and broke windowpanes of the house.

Moreover in Mandel, near the military garrison, the Pakistani forces raided the house of Dr Haneef Baloch and six of his neighbours. They deliberately set ablaze the houses and let them burn to ashes. While the houses of innocent poor Baloch were in flames the so called Islamic military of army celebrated with joy. They also warned other residents in their area that their houses will be burnt; they accused the Baloch as the agents of India and America or what the Islamic army calls “the infidels”.

The Pakistani military forced the shopkeeper to open their shops because they had shut their businesses in protest of the military operation in Mashky and surrounding areas. Some shopkeeper who were not present in the market their shops have been set on fire. Houses of the members of Baloch Student Organisation (Azaad) Fida Baloch, Zahor Baloch, Haroon Baloch, Mustafa Baloch and Gul Hassan Baloch were also burnt down on purpose. Their family members including women and children were forced out of their houses, humiliated in public and severely beaten on the roads.

On the other hand protest against ongoing military incursion against people of Balochistan also intensified and are continuing. BNF, Baloch women panel, Anjuman-e-Itehad Marri and BSO-azaad in their separate statements strongly condemned the military operation in Mashky. The Baloch pro-freedom nationalist parties term the new offensives of the Pakistan military as the psychological defeat of the occupying forces. They believed that the military has lost its senses and it is using the full military might indiscriminately against defenceless and unarmed armed civilian population in Balochistan.