The Baloch are united in the fight to win sovereignty 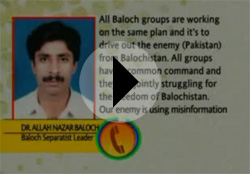 BALOCHISTAN, October 11: In early 2005 Islamabad invited disillusioned Baloch leaders for a dialogue. But, as expected the ruling civil-military establishment deceived them. And while the Baloch leaders were talking to a 12-member parliamentary committee on Balochistan, several hundred Baloch political activists went missing. Today the regime may have changed, but Prime Minister Yousuf Raza Gilani continues to follow the same game plan and has urged Baloch nationalist leaders to hold talks with the government to clear existing grievances. The Gilani-Mengal summit has initiated what seems is an effort to create a division between the Mengals, who lead the biggest nationalist political party, and the Marris, who presumably head the armed struggle.