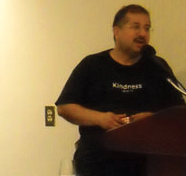 GENEVA, JUNE 12: A Baloch independence worker and representative of the American Friends of Balochistan called on the U.S., China, India and other powers to directly talk with the Baloch leadership to end what he called were massive human rights violations in the restive Balochistan region.

Ahmar Mustikhan, who came to Geneva on the invitation of Mehran Baluch, a son of legendary Baloch leader Nawab Khair Baksh Marri, was addressing a seminar organized by the Interfaith International and allied organizations at the Palace of Nations in Geneva.

Mustikhan narrated the  trail of tears and blood reminiscent of the Native Americans tragedy in U.S.A. that he said is being re-enacted  with impunity and great cruelty in Balochistan in Pakistan in southwest Asia.

Following is the full text of Mustikhan’s speech:

In the morning today, I was speaking with a Chinese scientist who said the U.S.A. was supporting Pakistan . I replied that the irony of the situation is while Washington D.C. is pumping billions, Beijing too is a strategic military ally of Islamabad . I take this opportunity to appeal to leaders of the two powers and any other powers to talk directly with Baloch leaders.

What worst form of human right violation can there be when the Baloch are not being allowed to wear their national dress on their ancestral lands.

I am acutely aware of the dangers that stem from Pakistan . This is the same region where nuclear war heads and Al Qaeda exist within close proximity, posing a nightmare for the world.

In Geneva , I am told if you cough the world listens. As such, I have come here to tell the story of extra judicial killings, unmitigated military operations, forced and involuntary disappearances, torture, massive internal human displacements that befate the Baloch  people in Balochistan.

Just because the Baloch believe politics and religion should be separate, Pakistan army soldiers, who I like to call the Taliban in uniform, are attacking the Baloch natives and calling them atheists, according to news reports in the popular daily Tawar newspaper. This is happening right now as I speak here today as a military operation is in full swing in my native coastal Mekran area in Balochistan.

Most recently in spring, there were half dozen cases when acid was thrown on the faces of Baloch women and girls venturing out of their homes. In once case, three sisters in Pandrani area of Balochistan’s Kalat district were targeted.  In an earlier attack, two sisters in Chagai district faced the same atrocious attack by those who do not believe men and women are equal by birth. We can say for sure Pakistani non-state actors are behind these incidents.

The badly mutilated faces of these girls and women are a stark reminder for the world the dangers that stem from Taliban and those responsible for their resurgence in the Afpak region must be brought to justice. These soldiers of Pakistan have jihad as their military philosophy.

In this backdrop, thousands of Pakistan soldiers have been dispatched to the mountainous region of Mekran area in Balochistan not to take on the Taliban but the secular Baloch forces yearning to become masters of their own destiny. Thousands of families have fled for safety. Already there are tens of thousands of Baloch tribesmen, notably from the Bugti and Marri tribes, who are homeless and have the skies as their roof because of the more than five-year-old Pakistani military operation.

Local activist groups in Balochistan including the highly respected Baloch Women Panel have warned of a famine like situation developing in Mekran because of Pakistan military actions, Mustikhan concluded.
Earlier on Thursday, Mustikhan turned on the table on the Pakistani delegate at a meeting convened to draft a resolution on Enforced and Involuntary Disappearances in Balochistan. France, Argentine and Morocco head the panel consisting of 83 nations.

The Pakistani delegate Marghoob Butt, widely believed to be an operative of the Inter Services Intelligence was trying to dilute the languae from claims to allegations when it came to rouge states like Pâkistan.

“This change from claims to alleations will be an affront to the work of premier human rights organisations, including the Human Rights Commission of Pakistan,” Mustikhan thundered.

“Pakistan has abducted more than 1.000 of my blood and bone in Balochistan. I take offense to the presence of pakistan at this panel,” he protested. “I am staing a walkout,” he said.

He was joined in the walkout by Baloch torture victim Munir Mengal and Bilal Baloch.