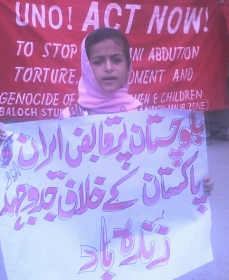 Occupied Balochistan: Five Marri Baloch namely Kamal Khan Marri, Laeya Marri, Lala Marri and Lal Mohammd Marri were on their way home Killi Kamaloo from Hazar Ganji fruit and vegetable Market when the FC stopped their car on Hazar Ganji link road. They have immediately been blind folded and put into the vehicle of intelligence agencies that have already been waiting for them at the check post. Their Alto car has also been taken away. Few hours later a relative of the abducted men Mr Azad Marri has also been detained when he was going to the Shalkot police station to register an FIR against the forced-disappearance his relatives. Like the other man Azad was also first stopped by the FC near Qambarani road check post and later they handed him to the intelligence agencies.
END_OF_DOCUMENT_TOKEN_TO_BE_REPLACED

Occupied Balochistan, KHARAN: Unknown armed men kidnapped two Frontier Corps (FC) personnel from a passenger bus near Panjgur on Wednesday. According to an FC official, the two personnel whose identity could not be ascertained were returning from their duties after completing their leave term and were travelling in a passenger bus when unidentified armed men stopped the bus and kidnapped them at gunpoint. The local police had started investigations for the recovery of the abducted personnel.
END_OF_DOCUMENT_TOKEN_TO_BE_REPLACED