BALOCH nationalist leader Harbiyar Marri has said he believes in resolving Balochistan issues through negotiation, adding that he was ready for direct negotiations with the Pakistan Army but in the present of international guarantors like the United Nations or European Union.

END_OF_DOCUMENT_TOKEN_TO_BE_REPLACED 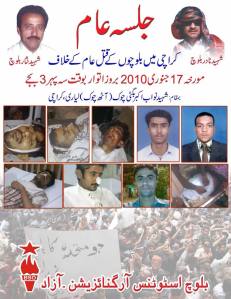 TORONTO, January 13 – Baloch Human Rights Council (Canada) has declared the recent killings of the indigenous Baloch populace in Karachi as a wider plan of the MQM to assert its administrative control over the city. The hegemonic and expansionist designs of MQM supported by the state policies are the root cause to all ethnic and sectarian strife and violence in Karachi. The goals sanctioned by the MQM’s reign of terror against lawyers in the past, looting and burning of two thousand shops, target killing of indigenous social activists who resisted land grabbing, and the indiscriminate killings of innocent Baloch and Sindhis in Karachi – is to decapitate Sindh’s capital from its historical and cultural roots and run it mafia-like as the Hong Kong of South Asia.