Rally taken out against search operation in Lyari 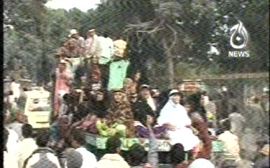 KARACHI : A large number of people including women and children took out a rally in protest against search operation and arrests in Lyari, Aaj News reported on Sunday.
END_OF_DOCUMENT_TOKEN_TO_BE_REPLACED

Federal Government had announced that missing persons from Balochistan would start reaching their homes from Eid-ul-Azha.

This announcement was made few days earlier before Eid-ul-Azha.

END_OF_DOCUMENT_TOKEN_TO_BE_REPLACED

Protests in Balochistan against the massacre of Baloch in Karachi

QUETTA/KARACHI: Baloch political parties and student Organisations have strongly protested against the ongoing attacks on Baloch people in Karachi. The leading Baloch student Organisation BSO (azaad) and other parties organised protest rallies and demonstration almost all over Balochistan including Karachi, Hub, Khuzdar, Kalat, Punjgur, Turbat, Pasni,Ormara, Jeavni, Mastung and Quetta. The angry protester chanted slogans against PPP and MQM and held banners inscribed against these two parties who they believed are behind the Baloch massacre in Karachi Baloch populated areas. The protesters said that the police and Rangers were giving full protection to MQM armed terrorists whereas Baloch villages were being attacked even by the Rangers and the Police.

END_OF_DOCUMENT_TOKEN_TO_BE_REPLACED

Baloch Human Rights Council (UK) strongly condemns the  kidnapping , torturing and target killing of unarmed Baloch civilians in Karachi .Baloch areas in Karachi have been under attack by a terrorist and fascist organization of refugees from India. This racist party (MQM) is a coalition  partner in the PPP led government.