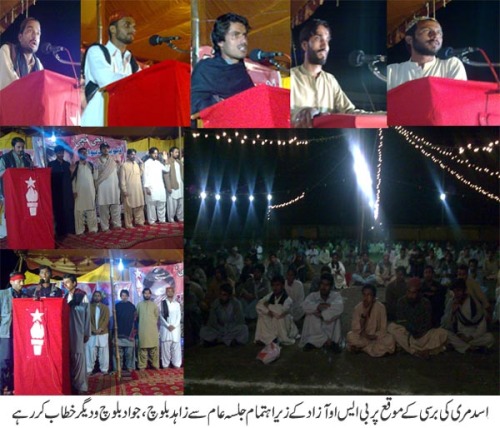 Quetta: BSO (azaad) Lasbela zone has held the third martyrdom anniversary of Shaheed Asad Marri here on Tuesday. One minute silence has been observed in the memory of Baloch martyrs and Baloch National anthem was played to began the proceedings of the memorial gathering. Newly elected president of BSO azaad Lasbela zone Masood Baloch, secretary general Zahid Baloch and CC members Jawwad Baloch and Qadeer Baloch paid rich tributes of the young Baloch martyr. while speaking at the occasion they said that Asad Baloch at his very young tender age has sacrificed his life for the liberation of Baloch land and his martyrdom was a source of inspiration for the Baloch youth.

The speakers has said that Asad Marri has followed the footprints of his bother [Wahid Marri] and his family, due to sacrifices of such young Baloch heroes and thier families sacrifices today thousands of Baloch have joined the caravan of liberty. The leaders of BSO said that the sacrifices of the Baloch martyrs have proved that ideology was the most powerful weapon. “Balochistan belongs to the Baloch people. Iran and Pakistan are foreigners and occupiers. No matter how hard Iran and Pakistan try to stop the Baloch liberation movement but Balochistan will soon become Independence” vowed the Baloch leaders.

The Baloch has become aware of their [they know the importance of freedom] some anti- independence parties and collaborators cannot stop the way of Balochistan National liberation struggle.