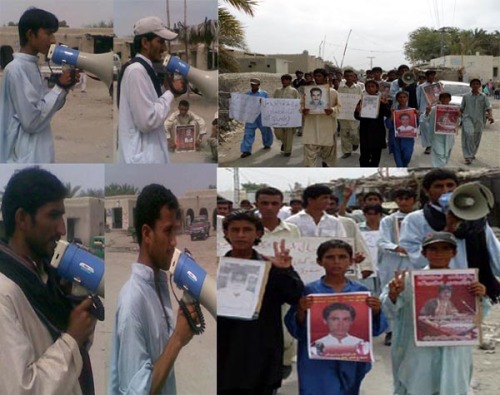 END_OF_DOCUMENT_TOKEN_TO_BE_REPLACED

Pakistani and Iranian forces are jointly engaged in military operation against Baloch nation, in south Balochistan. This state supervised joint military operation started on 18th August, 2009 in Kulber valley which is now engulfing other villages of Makran like Tump, Mand, and Bal Negor. Gunship Helicopters, Jet Fighter aircrafts and heavy artilleries are being used against unarmed civilians, in the other hand military search operation is being carried out against the Baloch political and social activists, many of them have been arrested and being tortured severely in Pakistani Military torture cells. Residents of affected towns are on road including children and women to protest against the barbarian act of Pakistan and Iran.
END_OF_DOCUMENT_TOKEN_TO_BE_REPLACED

Filed under Interviews and Articles, Reports